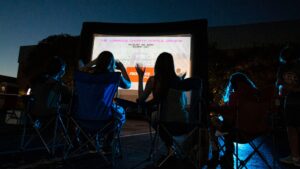 Further Than My Backyard

People love to compare making movies and putting them into the world like birthing babies. I will never be able to speak to this analogy but my friends and family that have given birth, have all done so successfully, some multiple times (Even during Covid).

Yes, Covid, the yellow eyed, snarling bastard that has shown how fragile societal structures can be just by hanging out in a bat. It didn’t even need to fund raise.

I had a very traditional plan when it came to getting eyeballs on my film, Luminous: make it, hype it, go to festivals and schmooze my ass off. Yesterday, I experienced what schmoozing at a film festival is like during Covid. I will say, it much more resembled the first day of third grade than the electric cocktail hour. Everyone sits in their little square on Zoom and has their turn to speak, then its over. If it is possible to build meaningful working relationships that way, it sure as Hell isn’t all that fun. I’ll keep trying.

Enter THE DRIVE-IN: a long lost outdoor communal venue that was all the rage before the Megaplex took over the Cinema Standard and made it its own. I had seen videos of concerts being done this way and thought, “this is depressing: everyone is in masks and separated with the music and editing trying to cover for the sterile nature of the experience.” BUT it is way less depressing than doing nothing!” I am a stubborn guy and I wanted to bring people together for a party, damnit!

I imagined it would be a slam dunk since most places were shuttered and the few Drive-Ins around were going strong. I began the quest, reaching out to the drive-ins first… crickets. I reached out to movie theaters… crickets (unless we came inside and sprayed each other with particles). I reached out to the universities, sports stadiums, the zoo… not happening. Little did I know, that finding real estate that is open to you parking a bunch of cars on it for a night is fucking hard to come by under any circumstances within city limits.

After almost giving up and having the San Antonio filmmaker, San Antonio charity, City of San Antonio event outside the city of San Antonio, Rackspace Technology responded and was excited to work with us. They are a cloud computing company that is world wide but has a home in SA.

Speaking to them was a reminder of what corporate professionalism looks like. I know, I know, it usually looks pretty gross when you take a step back but you have to understand that in small town film production, professional courtesy and business acumen are rare, bordering on non-existent.

The event went very well and we raised some money for the San Antonio Food Bank. I can’t ask for much more than that (though I would like to). Mainly, I am just grateful for the people in my corner and the people who would take time and risk leaving their homes to participate in anything I put together or have put together in the past. I love you fucking people.

I’ll update this post with more when I give the raffle prizes away and the $2116 dollar check to the SA Food bank. Wooo! Not too bad for a first marketing campaign charity event experiment.